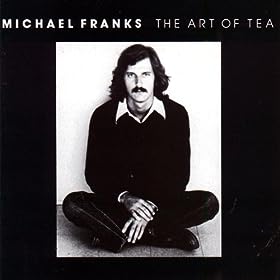 I've been wanting to write a post about Michael Franks for awhile now. This is another classic artist that has contributed so much to music and yet gets little credit by his own name. As per Wikipedia, his songs have been recorded by artists as diverse as The Carpenters, The Manhattan Transfer, Patti LaBelle, and one of my jazz favorites, Diana Krall. He's been making music for over 35 years, with his best work - for me - coming in 1975 with the album, The Art of Tea, which takes a jazzy look out the pop window. I picked this album up on vinyl in the basement of an old bookstore in Ithaca, NY for less than a dollar! It has that slight raspy sound from the scratches but it sounds right with the funk and the Chet Baker-esque feeling of Franks voice.

Franks has endless albums that I have yet to hear and I know after I write this, I'll find more incredible songs worthy of obsession but right now I can confirm that my favorite song from his catalog would be "Jive", a funky, smooth jazz gem that really makes me want to have a martini. See if you feel the same way.

And check out the 30 second clips of his songs on iTunes. I'm telling you, those clips alone will be enough to get the sense of this eccletic artist.

Labels: Michael Franks, Somebody to Love