Houses of the Holy

Houses of the Holy is without a doubt the greatest fifth album a band has ever put out, let alone one of the greatest albums of all time in general. This incredible album opens with The Song Remains the Same, a song I appreciate although I'm never too fond of songs over five minutes. The intense excitement for me starts with the third song on Side One. From that song - Over the Hills and Far Away - to the end of the album, it captures my entire being and makes me forget everything I'm constantly worried about. Led Zeppelin really has the ability to transcend people, even still in 2009. They are undeniable.

I have to explain that D'yer Mak'er, Zeppelin's ode to reggae, is one of my favorite songs and one those songs specifically that makes me feel something. I know it came about more as a joke than anything (with a play on the word "Jamaica") but they captured something in that song that is as sexy as it is inspiring. No matter where I am when it comes on, I want to dance, I want to think, I want to smile - I want to be alive. I can't imagine what more a song is supposed to do than that. 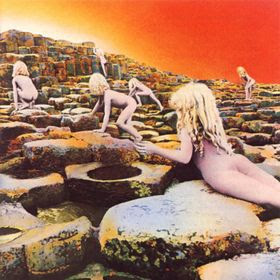 Recently, I discovered The Crunge or maybe I should say I discovered that I love it almost as much as D'yer Mak'er. This too is a song that allows the band to do a play on a specific musical genre, this time funk in the James Brown style, but to me it sounds like a style all its own. Unfortunately, it seems that this incredibly unique, over the top creative song hasn't gotten the credit in musical history that it rightfully deserves. I tried for a half hour to find a video or some type of clip of it on the internet to add to this post and came up empty handed. Why? I even went on Last.Fm, one of my favorite sites, to see if the page dedicated to the song had anything extra I could add to this and found that several people admitted hatred for it. I suggest these people stop listening to music. The crazy funk and the infamous "where's the bridge?" references make this song undeniably Zeppelin in the sense that it has so much soul and mischief but uncharacteristic and special in the way that it's not really "rock". If Led Zeppelin is responsible for bringing heavy metal to mainstream than they're also responsible for bringing experimentation and ingenuity to mainstream rock singles. Robert Plant's voice, already god-like in so many ways, does an Otis Redding-like imitation in my opinion. It's simply and wonderfully different.

To even get into the brilliance that is Dancing Days, the opener of Side Two, is to open a can of worms that doesn't really end. Dancing Days is an absolute, uncompromising masterpiece that probably only comes around once every 20 years. It is mentioned on the Wikipedia page for this song that the band themselves danced on the lawn after the completion of this track - so proud of their success. Naturally, I don't know if this is true but it sounds about right. I could listen to this everyday for the next year and probably find something new each time. It's like a really good movie - but getting my head around the fact that they can do all that just audibly is magic.