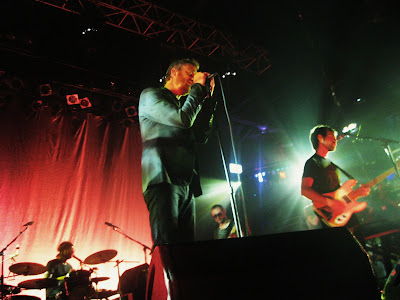 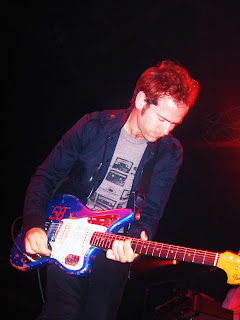 Since I've already over indulged in the last post about The National, I will keep this to a minimum. Friday, June 4th was my second time seeing this band at the Electric Factory in Philadelphia, PA. It's an okay place filled with an okay staff and an okay sound system. What made this evening special of course was The National themselves. After waiting two hours for doors to open, my comrades and I were lucky enough to secure front row center spots and wait another two hours (or maybe even longer) for The National to finally hit the stage. I do not want to be the one to say this but opening act The Antlers left much to be desired. I was extremely unfulfilled in a way that almost soured the first few minutes of The National's set. I can't understand why a song that has no emotional gravity must be over 10 minutes long. That is probably 7 1/2 minutes too many. Some of these songs might actually be really decent if it weren't for the fact that many sounded the same to me (possibly because of the sound quality of the venue) and the length drove me crazy. On a positive note, I know this band has a pretty good following and a lot of people with great taste have told me multiple times that this is a band to check out so I'm not writing them completely off just yet - and really - is it fair to judge anyone on the same night as The National?
The wait was well worth it once they hit the stage. With the trademark blazer on his back and wine glass in his hand, Matt Berninger made this another concert for the books. The packed crowd was treated to the classics "About Today", "Cherry Tree", and one of my personal favorites, "Baby, We'll Be Fine". To say that this was a phenomenal setlist is an understatement. Hearing some of these songs for the first time live was an absolute treat and well worth braving the weirdos in Philadelphia yelling at you to park your car in abandoned areas for $10 and your hat. 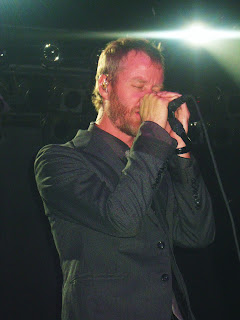 Since I was standing a little further off to the side, I had the pleasure of being directly in front of Bryce Dessner most of the night and it was the first time I was able to see firsthand how incredible this man is at his craft. The unbelievable intensity he has while playing is not only fascinating to see but technically perfect. And this can truly be said about any member of the band. Every individual is so talented and professional that it is genuinely astonishing. There is so much detail and texture in every note that I am continuously blown away by the cumulative power of it all. There is not a single portion of a National show that I walk away being disappointed by. No matter what night you catch them, it is obvious that they are putting their entire heart and soul into the actions.
Thankfully, we were able to capture some of the best shots of the band that I have ever had the fortune of getting which display their emotional intensity pretty well. Although this was a bit of a somber night in terms of catching any wonderfully crazy antics from Mr. Berninger, it was special in other ways. There was a spontaneous authenticity that brought electricity to the room.
And not just because it was the "Electric" Factory. (haha?) 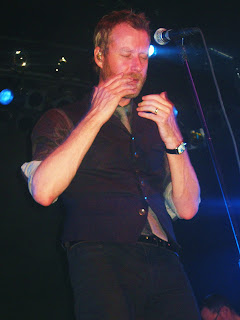 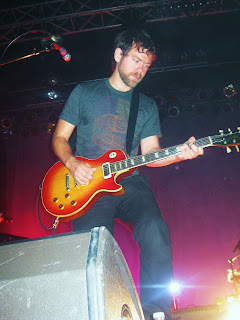 Those are great pictures. Who took them?

Thank you. They're my photographs taken by my partner and me.