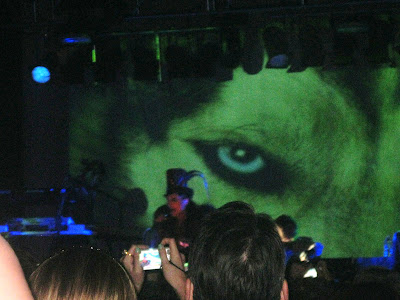 This comes rather late but I just wanted to mention the wonderful concert I was lucky enough to attend at Starland Ballroom earlier in the month. As one of the fastest sellouts in Starland history, Adam Lambert managed to live up to most of the hype and deliver a vocally phenomenal performance. 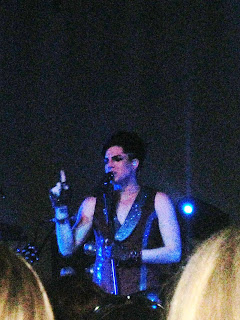 While I'm not the biggest fan of his songs individually, his voice makes up for anything the music itself may lack - and the fans! For an artist that has only been around a little more than a year, these people are pretty obsessed. While most of the crowd was females of every race, creed, and age you can imagine, the standouts to me were the young men (and even some older) dressed in Adam's trademark black eyeliner and spikey hair. These people made the night for me. Many ladies dressed for Adam as well with feathers, chains, shiny black materials, and any other synthetic fabrics out there. I'll admit that I did a little Glambertification as well. Wearing torn black tights, a brightly colored skulll t-shirt (that happened to be THE NATIONAL band shirt I picked up at a concert the night before), and black ankle boots, I was definitely trying to get in on the action.
Of course no one beat the original. Lambert looked stunning in the Cher-Lady Gaga-Rihanna sort of way. His outfits were so magnificent and arena worthy that they actually looked absurd in such a small club. With a gigantic feather in his Tom Petty-sized hat and a gorgeous jacket that I was too far back to get a good look at, he emerged at the end of a pre-recorded version of "For Your Entertainment". I will say that the beginning of the show was really odd for me. The lights went down and a random bunch of photographs of him in various glam settings came on to the screen and people started screaming like he was Mick Jagger - or more appropriately Britney Spears. The whole thing was a little too worship-like for me but then again some of these people had been waiting for 12 hours for him to get on the stage so I can understand their over-excitement (seriously, Starland had to post a warning on their site that no one would be allowed to wait over night in their parking lot and they turned their first person away over 24 hours before the show began - this is a standing room only, general admission venue after all). 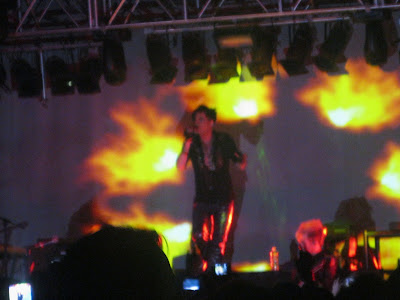 I'm not an expert on the album but I'm pretty sure he did every single track off it along with an Egyptian version of Johnny Cash's "Ring of Fire" (as some of you will remember from American Idol - Country Week was it? HAHA) and the wonderous Tears For Fears "Mad World". That obviously brought the house down. My absolute favorite of the night was an acoustic version of "Aftermath", a song I long forgot off the album that sounded ten times better live. Lambert's voice is a force to be reckoned with. Something that is not such a force is the strange dancing that goes on within the show. He has four dancers behind him and he also manages to get in quite a bit of choreographed dancing during the performance. It's not that it's bad, on the contrary the professional dancers are excellent at their craft, but after seeing him master Led Zeppelin on television, it's difficult to get into the zone of Pink-esque pop music that he is really a part of. I wish he would've gotten a little more rock but he was certainly trying to cater to every audience he has garnered since the American Idol days. He literally glamified every major genre, changed costumes at least four times, and sang in so many different styles that I couldn't keep track. He is trying in a big way. I can't wait to see where he is in five years.
Also, I must say, Adam Lambert is a great personality to be with for a little over an hour. His rapport with the audience was so easy, it was almost as if he was friends with everyone in the venue. He's articulate, funny, and rather witty - one of those people you can instantly tell is intelligent and has a sense of self. This was only his second stop on his first ever concert tour and he really did a fine job. 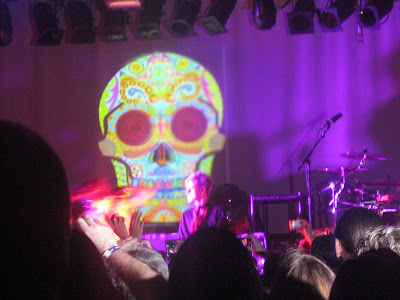 Music Again
Broken Open
If I Had You
Encore:
Mad World

This is my favorite kind of video. Just found this on Youtube and although it's not the greatest sound quality, it gives you that 'concert feeling'. The wonderful excitement of the crowd cheering and singing along with every word. Watch and enjoy. "Aftermath" is a great song.
Photos courtesy of myself and my ridiculous camera.
Written by A.D. at 3:05 PM