Somebody to Love: Suckers 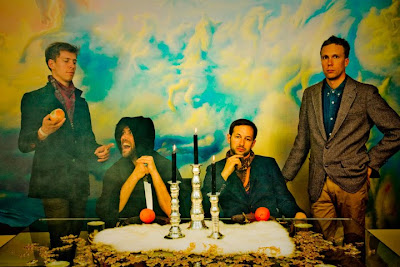 You know how typically opening bands are pretty bad? Particularly before your favorite band comes on and you're waiting hours and hours through one horrible band after the next because nothing compares to them? Yeah, me too - until Suckers opened for The National at Spin Magazine's anniversary concert at Terminal 5 last Thursday.
The second I heard their first song I knew it was something I'd have to write about. This band (particularly after the sound difficulties of Kurt Vile) sounded not only technically good in a weird psychedelic way but really fun. Standing alone in a sea of shorter people, feeling uncomfortable and uneasy, they actually got me dancing. Before the show I had read a review of the band that called them a "Brooklyn version of The Beach Boys" or something to that effect so I was expecting something a little different than a dirty-looking-Robert Downey Jr.-in-his-drug-phase young man to come out with makeup on and a turquoise hat singing about "getting your body moving".
Everything from the set up of the band on stage (drums front and center) to the versatile looks of the band members were strange. From left to right it looked like a clean-cut, pin-thin David Bowie on guitar, a drugged out college freshman on drums, an Indian spaceman on lead vocals, and the math nerd next door on trumpet and other various instruments. These descriptions actually make it all sound a little too normal if you can imagine. I don't want to say this band is what I imagine rock 'n roll to be in the '60's but certainly in comparison to the bands I normally see in concert, they gave me a taste of something new. 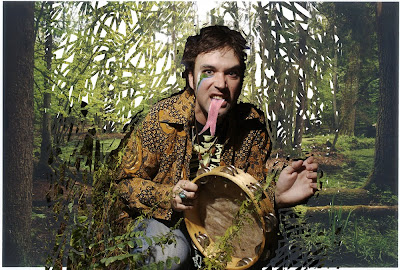 Quinn Walker, lead vocalist and seemingly leader of the craziness, is fascinating. Watching him on stage was weird and stupid and just fun. I saw two cute girls in front of me giving each other faces over his strange physical antics at one point and figured this sums up the general consensus of the audience. What are we watching? I guess it's awesome. Are they faking? They didn't seem to be. Their quirks seemed authentic, particularly Walker's desire to act out every lyric of the songs as he sang. I've never seen such a thing but I guess I'm going to the wrong concerts.
As for a little background, Suckers is in fact a Brooklyn-based psychedelic-pop indie quintet that had their first EP produced by Yeasayer’s Anand Wilder and Chris Moore of TV on the Radio and Yeah Yeah Yeahs fame, which says much about the style of this band. They're wonderfully strange and although I've read bits of articles where they're predicted to be a "flavor of the week" or just a quick flash in the pan, I think there's something really interesting about their music and have little doubt that they're phenomenal musicians judging by their live performance. Walker's voice is particularly exceptional. Take a moment to check out Suckers.

Interesting piece. I will check them out this weekend. I will be seeing The National in November so maybe they will open for them.