I have been seriously in love with Chicago keyboardist Robert Lamm since I was 3 years old. I know he's 500 years old (66 this year to be exact) but the thrill of seeing him live has never waned. His voice and appearance are just as delectable as when he was 25 (not that I was alive but I've seen enough video to know these things). Seeing Chicago every summer has been a family tradition for over 20 years in my household and although there have been some changes that need to be mentioned, the concert still goes on and continues to sound pretty fantastic for a bunch of senior citizens.
The biggest surprise this year came in the form of musician Lou Pardini who as of last year replaced 30 year veteran of the band Bill Champlin, best known for bringing the band's biggest ever surge of soul and making the Peter Cetera/Jason Scheff executive change a little smoother. Since the band chose to open with Pardini singing "Make Me Smile" it was a little jarring to accept this new person. It seemed at first like he didn't belong. Standing behind the keyboard usually designated to Champlin, I just couldn't get used to him for at least the first 10 songs. By song 11, I loved him. Yeah, he's not the Bill Champlin who was far and away one of the most talented and loved members of the band but he brings that added jazz necessary to keep up the stamina of one of the longest running pop music bands in the world. After seeing a band 15 or so times and knowing all the tricks and medleys up their sleeves, it's kind of exciting to see someone new up there and have the wonder once again of what the song will sound like. Sadly, it's at the expense of someone who should not have left.
Beyond the Champlin controversy, a very unwelcome addition to the show was a Walter Parazaider imposter that not only jumbled the flute solo on "Colour My World" but just didn't seem to fit in. He looked confused on stage and while he appeared aesthetically like Parazaider, the founder of Chicago, it was offputting to see anyone else play the sax/flute. Luckily, the rest of the horn section was intact with James Pankow looking sharp as usual and Lee Loughnane taking the vocals on "Colour My World", a song occasionally sung by Lamm or Champlin since the death of original singer Terry Kath in the '70's.
Jason Scheff, a man who I used to consider the lead singer of Chicago (mostly because he was the Cetera replacement), was also pretty off last night. I love him wholeheartedy but I wouldn't be surprised if he was an alcoholic. His frantic movements and fragmented singing was driving me crazy throughout the entire concert. It almost sounded like a parody of Peter Cetera. This is all rather unfortunate too since in recent years I have grown particularly fond of his versions of the Chicago songs I used to only like with Cetera. While at 48, he is one of the younger members of the band, his voice seems to be falling flatter than the ones pushing 70. Of course Scheff has been singing these songs since he was 23 years old and without much variation in Chicago's repitoire, despite them having over 30 studio albums, I can see why he'd be bored.
Keith Howland and Tris Imboden, both impressive musicians and later members of the band, were flawless and their solos were some of the best parts of the evening. Not to be outdone was the true leader of the band, Mr. Lamm, who spoke to the crowd at one point as if he was a professor, directing them to websites and explaining the band's recent involvement with breast cancer research. While it may have been a little cheesy, I actually enjoyed the bits of conversation between songs. I think of the band members as imaginary family at this point so it's interesting to see glimpses into their personalities. When I was a kid I remember being a little miffed that we would see them live so many times all over the state and yet we'd never stay after the show to meet them. My aunt and cousin had Chicago pen pals and were fevered members of the official fan club yet never a handshake? I didn't understand. 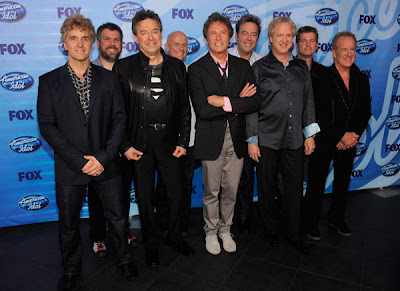 The ultimate highlight for me was Robert Lamm strapping on his acoustic guitar and coming center stage as he's been doing for decades to sing my all time favorite song "Beginnings". In a fitted pink t-shirt, dark denim, and white shoes, Lamm with his tan and fluffy hair doesn't look a day over 50 and he can still pull off the sexy, mysterious vibe the song needs. He's old enough to be my grandfather but I'd gladly date him in a second (see: inside cover photo on "Hot Streets"). I was then left waiting until the encore for "Does Anybody Really Know What Time it is" but naturally, well worth the wait. They brought The Doobie Brothers on stage for a back and forth song swap thing and with probably 25 of the best live musicians on stage, the songs sounded unbelievable. The Doobie Brothers' hit "Listen to the Music" probably stole the show more than any other but inevitably the concert ended with Chicago's "25 or 6 to 4", a Lamm penned, Scheff sung finale classic.
Flaws aside, I loved the show and secretly hated everyone who refused to stand up when Chicago came on stage. It is sacrilege to me to sit at a rock concert. You pay for the seat but you stand to show respect and dance. If you feel embarrassed, that's what the alcohol is for. Unfortunately, I even saw one woman scold a group of younger folks for standing up against the rail in front of her - on the lawn! Later, when two older ladies started dancing in front of me blocking my entire view of the stage, I couldn't help but fall in love with them. Dance! Dance your troubles away! That's what a concert is for, it's supposed to be the exact opposite of death - and most likely why the members of Chicago manage to look younger than me. I need their moisturizer.
Favorite Moments: "Beginnings", "Call on Me", Lamm busting out the keytar for "Does Anybody Really Know What Time it is?" 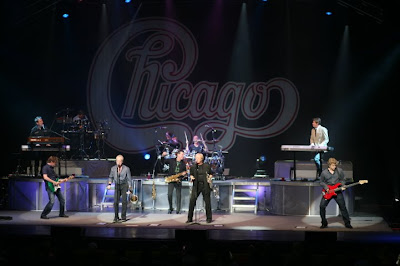 This is some great footage I found online of recent Chicago concerts. None from this concert but it nevertheless gives the vibe I'm talking about:
All photographs located on Chicago's official fan club website
Written by A.D. at 3:56 PM