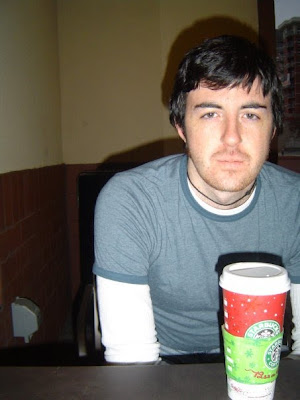 About four weeks ago one of my closest friends, Chris Joyce, suffered a massive stroke that sent shock waves through many people's lives and left Chris in a devastating situation.
Thankfully, Chris is currently recuperating from this trauma at a rehabilitation center fighting to get better every second but the damages left by this horrific tragedy are hard to cope with.
While you may not know Chris personally, everyone knows that one person in their group of friends that is somehow more lovable and more sensitive than anyone else and can somehow always find the right thing to say in any situation - and that person for me over the past three years has been Chris.
Although I had known him since high school through mutual friends, it wasn't until I moved back home from West Virginia after a pretty rough break-up that we became close. Specifically, I recall chatting with him online one night when we were just getting to know each other and later that evening writing in my "thankful journal" that I was most thankful for Chris telling me that "it was a pleasure" talking to me.
From there, we would meet up at the local Dunkin' Donuts and have two hour conversations over extra large coffees about our families, friends, relationships, the world - anything we could think of. There is never a dull moment with Chris and his ability to listen and recall facts is almost inhuman. I would tell him something small about my mother's best friend from twenty years ago and he'd bring it up in a conversation months later. These small gestures always catch me off guard and make me love him even more.
Although it might have been a short amount of time in comparison to other friendships, my three years with Chris were all absorbing. All or nothing sort of deal. We were together almost every day of the week and spoke on the phone at least three times a day. It wasn't really about being friends, it was a lot more natural than most friendships you come across in life. And I can't take any credit for that - it was all him and his natural conversational skills and pure desire for affection and companionship.
Chris is the kind of person you want to spend hours drinking wine with and laughing with about how absurd everyone else is. If I had his level of intellect and humor I would be a much happier person. Chris could make any situation into something comical and lighthearted - and he was always ready with a hug or some offbeat compliment that always made me happy in a way no one else can.
This is not to say he didn't have downfalls. I would be remiss to not mention that everyone has flaws and it's not always possible to show your best side to everyone all the time. Chris was occassionally a cheap jerk that could make me cry like a maniac sometimes - with people watching - but I'm definitely not the first to say that without the bad you don't have the good. The good times with Chris were made that much better because you knew he wasn't the kind of guy to smile or laugh for the hell of it. You had to earn your laugh from Chris and that made it a lot more gratifying in the end.
If I hung up on Chris because he made one too many remarks about my high heels, I had the assurance that he was going to call me back two seconds later and be laughing on the other end, getting a kick out of my annoyance. Teasing me to no end about not wearing sneakers, not cutting my hair when he thought I should, listening to too much John Mayer and not enough David Bowie, and any other thing he could think of to get me frustrated. Then we'd say I love you and hang out later in the night.
Seeing Chris now is very difficult for everyone who loves him and for his family, particularly his incredible mom, but I do believe things will get better. Currently he's paralyzed on his right side and not able to speak too well but all of that could change in the coming months. He's only 24 years old. I believe it's very possible that his strength will be enough to get him through this.
On a general note, I have to say that it's always the biggest compliment when someone wants to be your friend but with Chris, I felt especially honored. He is one of the most eccentric, secretly brilliant, openly judgemental people I've ever met and our connection was completely random. Although we were complete opposites on so many fronts, we shared identical values on things that mattered and shared a very strong mutual love of mirrors, dress-up, cats, coffee, laughter, and honesty. He's one half of my entire heart and without him I'm just one half of everything I was before.
To everyone reading this, please pray for my amazing Chris to get better and get back to his usual, kooky self as quick as possible. And although I might be pushing the corny limit, I sincerely ask that next time you see your dearest friends please hug them as tight as possible and don't let go until they know deep inside of them how much you love them. It's one of the only things on this earth I can find a meaning for.
My love, respect and admiration for Chris goes beyond anything I can formulate properly and although a stuffed animal at the hospital might not get the point across, I hope he knows that I'll be there for him always and our friendship is too strong to ever be changed, even by this.
Written by A.D. at 3:32 PM