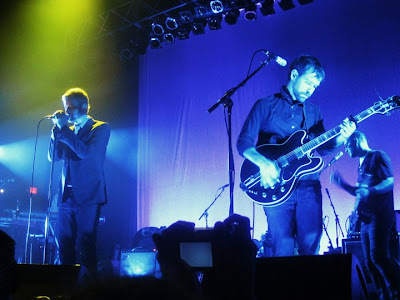 I don't know how many times I can say it: Matt Berninger is the greatest frontman in contemporary rock music.

After seeing The National six times this year I almost go to their shows hoping I won't like something so I'll have a shot at writing a different review. Of course, all I'm left with after the fact is a brilliant show that doesn't need my words slobbering all over it. There are only so many times I can start these reviews with "I can't express how much I love The National..." or "The National are the greatest band on earth..." Some people might get the impression I'm a little obsessed. I am.
Before I get into my usual gushing, I have to say that I've been to two concerts since I saw The National perform and although both were great in their own ways, I couldn't muster the excitement I thought was necessary to appreciate either fully. The National has ruined me for any other band. I go to a show knowing that the singer is not going to completely encompass the lyrics of the songs and I know they're not going to come into the audience and sing into people's faces half inebriated and half embarrassed. Maybe it's strange that I love Matt Berninger more than anyone in the world or maybe it's just that he is incapable of disappointing me - and everyone else in the audience.
And it's not just Berninger. Aaron and Bryce Dessner, Scott and Bryan Devendorf, and the occassional Padma Newsome make this band the greatest around. Their artistry and musicianship is unmatched by any I've seen.
Friday at the Wellmont was no exception. I've never been a fan of this venue but The National made it sound better than ever. Berninger came out drunker than usual with the requisite wine bottle and immediately went into "Runaway" which had been more of a closing number in their summer tour. While 50% of the show was dedicated to songs off High Violet, the other half managed to have a couple surprises, mostly in the form of "Daugthers of the Soho Riots" and "Available" which are songs I've seen this year but not recently.

It's always extraordinary to see a song start off calm and collected and end in a beautiful shambles. Songs like "Afraid of Everyone" and "England" begin in nearly a whisper with simple lyrics that set the scene and by song's end the anthemic lines begin in repetition with Berninger screaming at the top of his lungs and falling into microphone stands, Aaron and Bryce closing their eyes intently playing guitar all the while. There is no other band that could pull off a line like "Your voice is swallowing my soul" nearly ten times in one song and practically bring the crowd to tears. I clutch my heart every time I hear it.

After an exquisite performance of "Fake Empire" to close the set, the encore started with "Vanderlyle Crybaby Geeks", a song I had a difficult time appreciating since the new album came out. I think the title is corny and since it's near the end of the record, I just dismissed it more than I should have. Hearing it live gives it an entirely new life. The beginning lines "Leave your home, Change your name. Live alone, eat your cake" are basically just Berninger a cappela and it kills me every time. Hearing his deep voice trying to hit the high notes and faltering just enough to sound authentically painful is incredible. He makes himself so vulnerable on stage that I can't imagine the entire audience not falling in love with him by the end. He feels the lyrics with every fiber of his being - or at least makes it appear that way. His charisma is otherworldly.
In true National fashion, the show ended with Matt climbing on speakers and falling into the audience with his trademark, larger than life microphone cord trailing behind him. It's impossible to explain how it feels to watch him perform unless you're there to experience it. There are a lot of great musicians out there but it takes something a long the lines of magic to be the best.

All photographs courtesy of me and my bozo camera.
Written by A.D. at 1:39 PM